A couple of days ago, we went on a tour of the Normandy countryside to see various sites related to the D-Day invasion. Norman weather is apparently fairly moody and can change quickly, so I’ve been told. Our tour day was a perfect example of this. The day quickly changed from the forecast of mostly sunny day in the 70s to a dismal overcast day with a high in the 60s and intermittent bouts of rain showers.

We made the mistake of dressing per the forecast, so for much of the day, we were cold but the weather was actually perfect for our tour. It would have felt somehow off to be on Utah or Omaha beach on a bright sunny day; instead the weather helped to create a rather somber mood and gave us a small taste of what our troops faced (minus the bullets of course) as they struggled through rough seas and cold rain to get to the beach.

If you come to Normandy, a visit to these beaches is a must-do. There are plenty of guided tours, which I recommend in order to make the most of your visit. Our guide was full of interesting info and we learned quite a lot. I also recommend a visit to a WWII museum (the one in Caen is a great option) or watching a couple of documentaries before your visit so that you can put things in context and have a richer understanding of what happened on and just after D-Day.

We visited several sites, which I’ve broken up into a series of posts, all tagged with D-Day.

This was the easier and less bloody of the two American beach landings as we were pushed off course by foul weather to a less-defending area. Not so with Omaha.

Utah Beach is more of a preserved site – if I remember correctly, the mayor of the city during the post-war years is mostly responsible. There is also a museum there and several monuments. Among the monuments is one to the engineers, among the first of our troops to hit the beach since they were assigned the duties of clearing mines and obstacles from the area.They apparently had time on their hands after reaching their objective since one of the vert first monuments was for engineers built by the engineers themselves. There is also a US Navy monument but that wasn’t built until many years after the war ended.

At the head of the trail leading to the beach is a Higgins boat. This was the flat-bottomed boat that our troops came to shore in, which would have been a brutally rough ride in the stormy seas on D-Day. As it was, most of our troops on Utah and Omaha suffered from debilitating sea sickness as it took hours for the boats to get close to the beach and were soaked through with cold sea water before they even got out of the boat.

Utah Beach is also home to Le Roosevelt Cafe, dating from the war years. Go inside and you can see the walls and tables signed by US veterans who came back after the war to visit. It’s really cool. What’s also very nice is that many of the roads in the area were renamed after various US service members who lost their lives taking the beach. It gives me chills (in a good way) to see how many ways the people of Normandy have paid tribute to US and other forces who participated in the liberation and even today, flags from many nations fly all across Normandy. 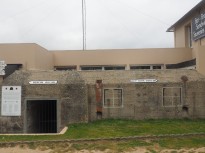 Here’s where the weather turned rather ugly on us so we weren’t able to explore or take as many photos as much as I would have liked. Today, the beach is once again used for recreation and little remains to indicate that it was one of the bloodiest battles of D-Day, other than the name Bloody Omaha.

There is still a piece of the Mulberry harbors – these were huge box-like structures used to create a fake harbor for landing supplies and vehicles since all of the real harbors were heavily guarded by German troops. I was able to walk on it since it’s positioned at the base of the pier, which is a pretty incredible experience to retrace the footsteps of our troops in such a historic battle.

At the top of the bluff overlooking Omaha is the American Cemetery, which I will write about in a separate post.

Mulberry harbor at the base of the pier

One thought on “Normandy D-Day Tour: Utah and Omaha Beaches”