I’ve always wanted to travel around Europe – I just hadn’t planned on doing it one country per month in the same year, but that’s how things are working out so far this  year (which can only mean I have some posts to catch up on writing!). 🙂  Hey, I’m not complaining.

Portugal is the third European country I’ve been to this year (with the Netherlands coming up next month and a 4-country tour the month after that). For this trip, I was meeting members of my team to co-work for a week, something I do about 2-3 times a year. This is one of the cool aspects of working for a 100% distributed company: my co-workers live across the globe, giving me exposure to a wonderful diversity of cultural and the opportunity to travel.

I have the hardest time sleeping on planes and this just wrecks me on these long overnight flights. By the time I landed in Lisbon, I had been awake for something like 32 hours with nothing more than a couple of broken hours of cat-napping. The same thing happened when I flew to London in February and man, it’s tough to be mentally scrambled from a lack of sleep and land in a place you’ve never been and get yourself from the airport to where you need to be without feeling hopelessly inept. But, it always works out. 🙂

Fueled with a pretty terrible airport cappuccino, I breezed through passport control and customs (unlike my experience in London), hailed a cab, and was on my way to my Airbnb, Passion Inn (highly recommend, host Catarina is fabulous!) It’s always an interesting experience coming from the controlled environment of a plane or airport for 10 or 15 hours to being thrust into a foreign city, full of different sights, sounds, and smells. I sat in the back of my cab, listening to Portuguese rap on the radio and checking out the old buildings crowding the busy streets. The music abruptly switched to an American top 40 song, at once comforting and disappointing in its familiarity.

One of my co-workers had already arrived the night before, so I freshened up, then powered through my tiredness and went for a 2-hour walk with her around the city. The Moorish influence is still visible in the architecture hundreds of years after the “occupation” ended, mostly in the tiled façades of many of the buildings. Sadly, a lot of the buildings have fallen into disrepair. 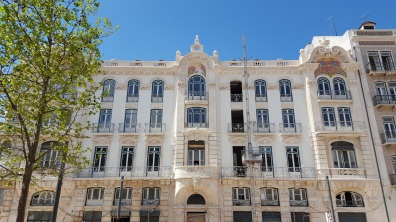 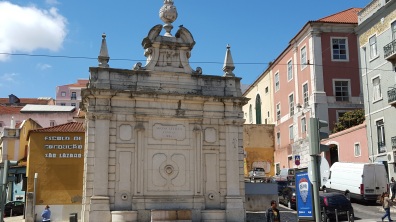 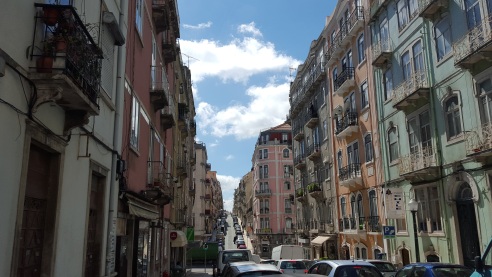 I’ll also say they don’t call this the city of seven hills for nothing.

In some places, the grade can be quite steep, or you may have to scale a few flights of stairs. Or, you know, 250 steep stairs that felt like 1,000. As we decided to take a “short cut” to the next block over, we heard a local mutter “good luck” and we soon found out what he meant. This was only a few of the flights of stairs we climbed.

Since this was a work trip, my group spent most of our time working, but we did take time for some fun too. We spent our Saturday on a full-day tour of the city with our very patient guide, Edgar, who not only put up with our silliness and antics, but maybe even enjoyed it.

Our first stop was a scenic overlook at Our Lady of the Hills, where we got a panoramic view of Lisbon and an education on a little of the city’s history. Most of the city was destroyed in an earthquake in the 1750s and was rebuilt in the years afterward in a grid layout with what at the time were very wide streets. From our perch high above the city, we could just make out the gridded area and the older area with narrow twisting streets. If you look closely at the photo below, you’ll also see the April 25 bridge – remarkably similar to the Golden Gate in San Francisco, which is not surprising once we learned it was built by the same person and designed to be earthquake-resistant.

Next up was Castelo de São Jorge, a Moorish castle hovering at the city’s skyline from its roost atop a hill. The view from the castle was just as stunning as the view from Our Lady and one of the towers is now home to a periscope that uses a system of lenses and mirrors to project a 360º detailed real-time view of the city on a large screen. Here are a few other pics from the castelo.

Me, oblivious to teammates’ shenanigans 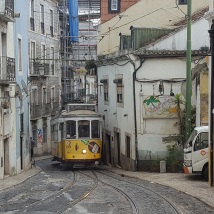 Next, we toured an older section of the city where the streets were so narrow that a Smart car would be a tight fit. The buildings were very old and the apartments so close together that neighbors could shake hands with their neighbor across the street or next door without leaving their house. Our guide stopped off at a tiny bar, really no bigger than a large closet, where we sampled the local drink, ginja. 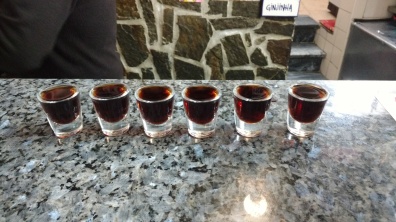 Ginja shots for everyone!

Almost had to walk sideways to get down this alley 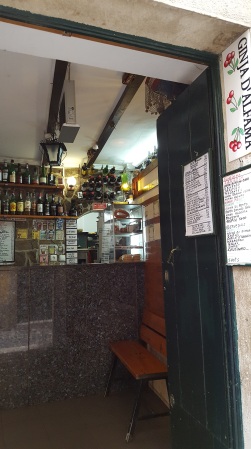 Our teeny tiny bar- this is all of it.

Next stop was Jerónimos Monastery, a spectacular Gothic structure that was even more breathtaking inside. It also houses the tomb of Vasco De Gama and  Luís de Camões, described as “Portugal’s Shakespeare”. 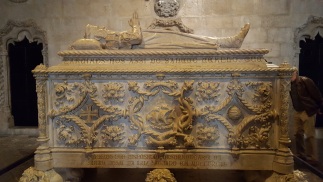 We took a quick break for refreshments at Pastéis de Belém for pastéis de nata (egg cream tarts, a local specialty), which were delicious.

Last stops on our tour were the Belém Tower, built in the early 16th century on the bank of the Tagus River, and the Padrão dos Descobrimentos or Monument to the Discoveries. 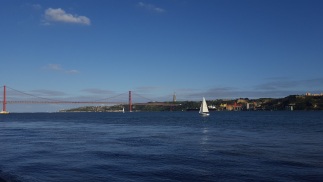 View from the monument 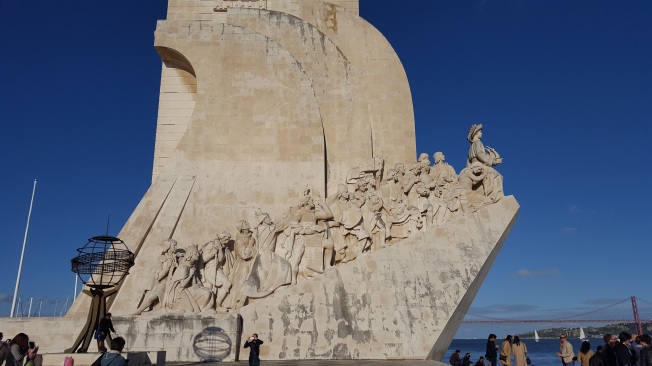 Here’s a few shots of the city at night during one of our walks to dinner.

I would be remiss if I didn’t include a picture of a local dish, featuring steak topped with an egg and gravy. And our favorite restaurant, Zé do Cozido. We went twice and on our second trip, so many of us ordered the sirloin on a stone (see pic) that they ran out of the heated bricks used to cook the steak and we had to share. Man, that steak was good! They also had a fantastic risotto if you’re not into cooking your own beef.

At Zé do Cozido, where I happily cooked this delicious steak on a stone.

I’ll close this post with a few from the skylight in my room. 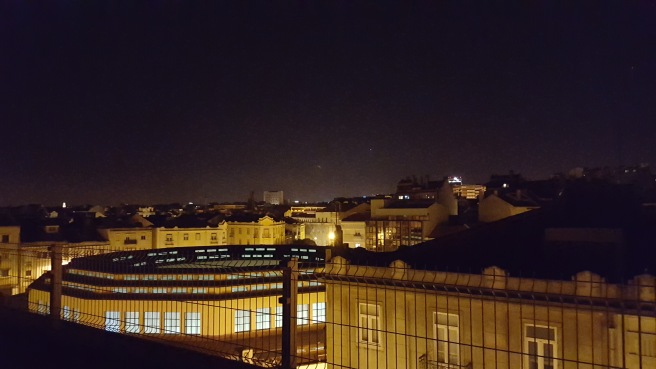