For our last full day in Kauai, we scheduled a snorkeling trip that was supposed to take us to the Nā Pali coast. The ocean had a different plan, however, and we ended up going the other way around the island due to high surf and rough seas. No matter—the weather was perfect, the views were spectacular, and the water was still cold. 🙂

Our ship was a nicely outfitted catamaran, the Northern Star. Not too long after we left the marina, we were followed by several different pods of dolphins, some of them making a game at swimming just under and ahead of the hull. Just watching them glide through the water so effortlessly was amazing. Not to anthropomorphize too much, but I could swear that the dolphins were having just as much fun entertaining us as we were at being entertained.

I liked how the sunlight made the water glitter in this image. 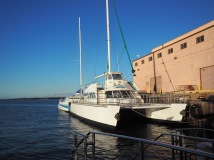 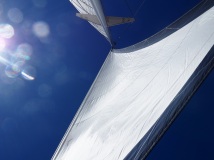 A group of dolphins racing our boat.

I loved the synchronized movement of these 3 dolphins, their bodies aligned in graceful arches as they came up for air together.

A stretch of beach not easily accessible by land. I love that Kauai still has plenty of undeveloped places.

The little “pop” of red of the boat in the foreground caught my eye and made a nice contrast to the rish greens and blues of the land and sea.

A bit of rugged coastline, lined with Kauai’s reddish-orange dirt.

Now, normally, I don’t swim unless the water is at least 83°F and this water was maybe in the low 70s, but how often do you get a chance to snorkel off the coast of Kauai? So, in I went. And yes, it was cold, but it didn’t take too long to get used to. The sea turtles are remarkably unafraid of people, which isn’t necessarily a good thing, but it did mean that I was able to get a few nice photos with my new waterproof cam. At one point, I even had to back myself away from one that was getting a bit too close.

There was a group of scuba divers swimming below us and I was ridiculously fascinated with the plumes of bubbles that their air tanks sent up. At one point, I commented to a co-worker that it was like swimming in champagne as the bubbles effervesced around me. Some of the bubbles were large and looked like tentacle-less jellyfish while others were tiny and completely filled my field of vision. Underwater, the bubbles looked like droplets of quicksliver rising underneath me. As they neared the surface, they looked like glass beads, reshaping themselves around me. 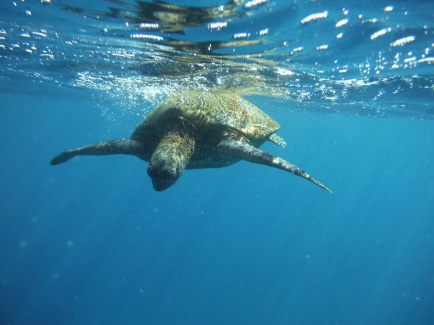 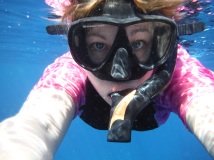 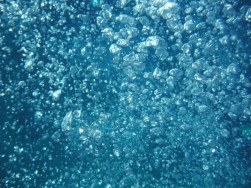 After we got done snorkeling, the crew served us a lunch and we took a leisurely ride back to the marina.

3 thoughts on “Snorkeling off the Coast of Kauai”