One of the (many) perks of my job is the opportunity to travel to some pretty amazing places. When our December meetup destination was announced, I was excited for two reasons:

The plan was to spend about a week on Kauai with my co-workers, and then meet my husband on Maui for another five days or so. Getting from Florida to Hawaii is no quick trip. I woke up around 3am EST for my flight and after three flights, two layovers, twelve hours in the air, and being up and traveling for almost 24 hours, I finally got to my resort at around 9pm HST (which is 2am EST).

My last flight was late, but the views from the plane made up for it.

We spent most of the week working, but spent our last two days at play. Honestly, spending the week with people I like and with views like this, it hardly seems fair to call it work:

The foliage and tropical atmosphere reminded me quite a bit of home, but the Polynesian culture creates an more exotic environment—at times, I had to remind myself that I was still in the US. The beaches were also quite a bit different than Florida beaches. With rocky coast lines and black lava rocks lining the beach and forming tide pools, the beaches are distinctly unFloridian. Even the vibrant golden orange hue of the sand is different than the white or beige and tan shades I’m accustomed to seeing. 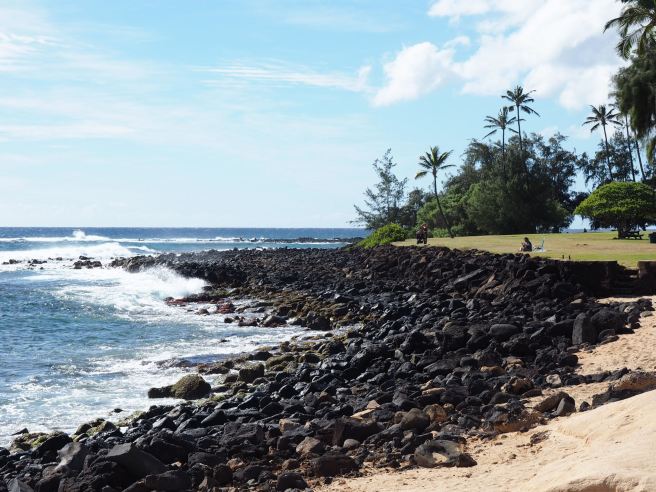 In some places, the soil takes on a reddish orange tint, apparently as a result of volcanic activity. They even use the dirt as a garment dye (and yes, I bought several Dirt Shirts while I was there).

We stayed at the Villas at Po’ipu Kai – our group of about 40 somewhat took over the resort. One thing we all noticed right away were the groups of feral chickens that roamed the island. I confess that I got a silly amount of enjoyment out of spotting chickens out and about everywhere. In Cyprus, we had cats. In Kauai, it was all about the chickens.

I’ll wrap up this post with some pics of the resort. Stay tuned for more posts and pics! 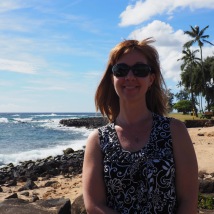 Me, at the beach by the resort

My front door, decorated for Christmas 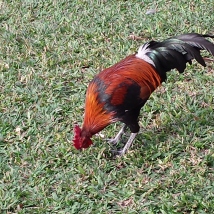 The kitchen in my villa 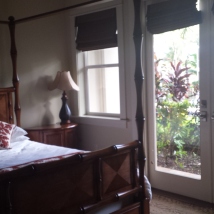