Yes, we actually worked while we were here and this was our office.

I just returned last week from my first Automattic team meetup in Cyprus, where I spent an amazing week in a beautiful place surrounded by awesome people. Folks, it doesn’t get much better than that.

My team is composed of developers and support staff who work together to design, develop, support, and improve the paid upgrades available through the WordPress.com store. Like the rest of Automattic, we’re spread across the globe, so we get together several times a year as a team to work and play in person.

Typical. We are so serious all the time.

Folks from Bulgaria, Austria, England, Ireland, Australia, Israel, Wales, France, and Switzerland*, and of course, people from all over the US, converged at the at the Columbia Beach Resort, which is a bit remote but beautiful. I was fascinated with all of the different accents and learning about the places where my co-workers live.

(*I hope I didn’t leave anyone’s home country out.)

The Language Barrier – or, Wait, Aren’t We All Speaking English?

English people and Americans apparently do not speak the same language. We had several entertaining discussions and a few lively debates on:

I also picked up some new slang and colloquialisms, and since words and language fascinate me, this was endlessly entertaining. For example, my Welsh co-worker replied “Bang tidy!” to a group text, setting off a firestorm of “What does that mean??” replies.

According to her, it means something to the effect of “totally awesome”, but it sounds so much better to me. In fact, it sounds rather tidy. Bang tidy, I would even say. And it might just be my new favorite expression.

Yes, We Did Actually Work. Really, We Did.

One of my relatives posted this comment in response to one of my Facebook posts while I was in Cyprus:

Are you actually working?

Yes, yes we were. While there, we accomplished quite a bit. I have proof.

We managed to complete three projects, rack up a huge bar tab, climb a mountain, tour nearby towns and ruins, consume an extraordinary quantity of food, make friends with several cats who live at the resort, do a little shopping, dip our toes in the Mediterranean, and play a couple of marathon games of Cards Against Humanity.

But the best part was that we had the opportunity to meet each other in person and have time to get to know each other better. And that’s really what the trip was all about. 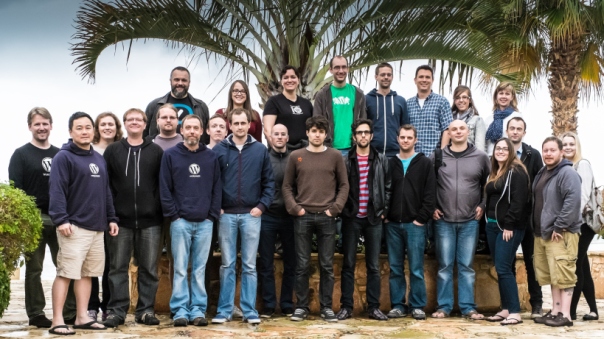 The WordPress.com Store Team – upgrading ur blogz and making things snazzy. I love my team!