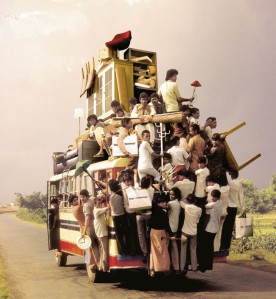 What airline travel is starting to feel like for most of us.

Looks like Qantas has come up with a novel idea for airline travel, literally.

Coming soon to a Qantas flight near you is a collection of in-flight books deliberately designed to only take as long as the flight lasts to finish reading. No Kindle required. The idea actually came from the Australian airliner’s ad agency, Droga 5 Sydney.

The agency partnered with publisher Hachette to create the books, each of which comes complete with custom cover art and a (presumably warm and fuzzy) intro from the Qantas CEO. Titles are geared to appeal to Qantas Platinum Flyers, who tend to be male, which means non-fiction, thrillers, and crime-based short stories are the most popular choices.

For those of you wondering how they know you’ll finish your book during the flight, it’s pretty simple.

What airline travel apparently feels like for a Qantas Platinum Flyer.

They figure the average person reads about a page a minute, then they estimate the minutes in flight for each route to get a total number of pages. Using an average number of words per page, the author writes that many words, slaps “THE END” on it, and voila!

But wait! What about longer flights with meal service (ahhh, meal service…remember that?)? Those smartypantses also factor in naptime and meal breaks and adjust the reading material accordingly.

Can’t trip them up, which is good since they’re flying planes and stuff and people who fly planes (especially ones I’m on) should be smart (and awake and sober…but I digress).

Genius idea or mere marketing fluff? Let me know what you think!

PS – As a side note, is anyone else thrown off by the fact that Qantas has no letter “u”? I mean, it looks weird, right?